So today was another round of Christmas baking. Well, I guess it wasn’t baking as I didn’t actually turn the oven on. SO, can you call it baking then? Hmmmm….

I wanted to make something to give to the folks that volunteer in my rooms in the preschool at church. I’m their coach. It’s a lengthy explanation – good for another post. I also had promised my sweet hubby that I’d make sure he had goodies in the store at church for his volunteers. And, I wanted to share some goodies with the gals that also coach with me on Sunday mornings. So, it was all about baking for those who serve with us. My favorite kind  of cooking – cooking for others.

At one point, my counter looked like this. And, the kitchen smelled heavenly. 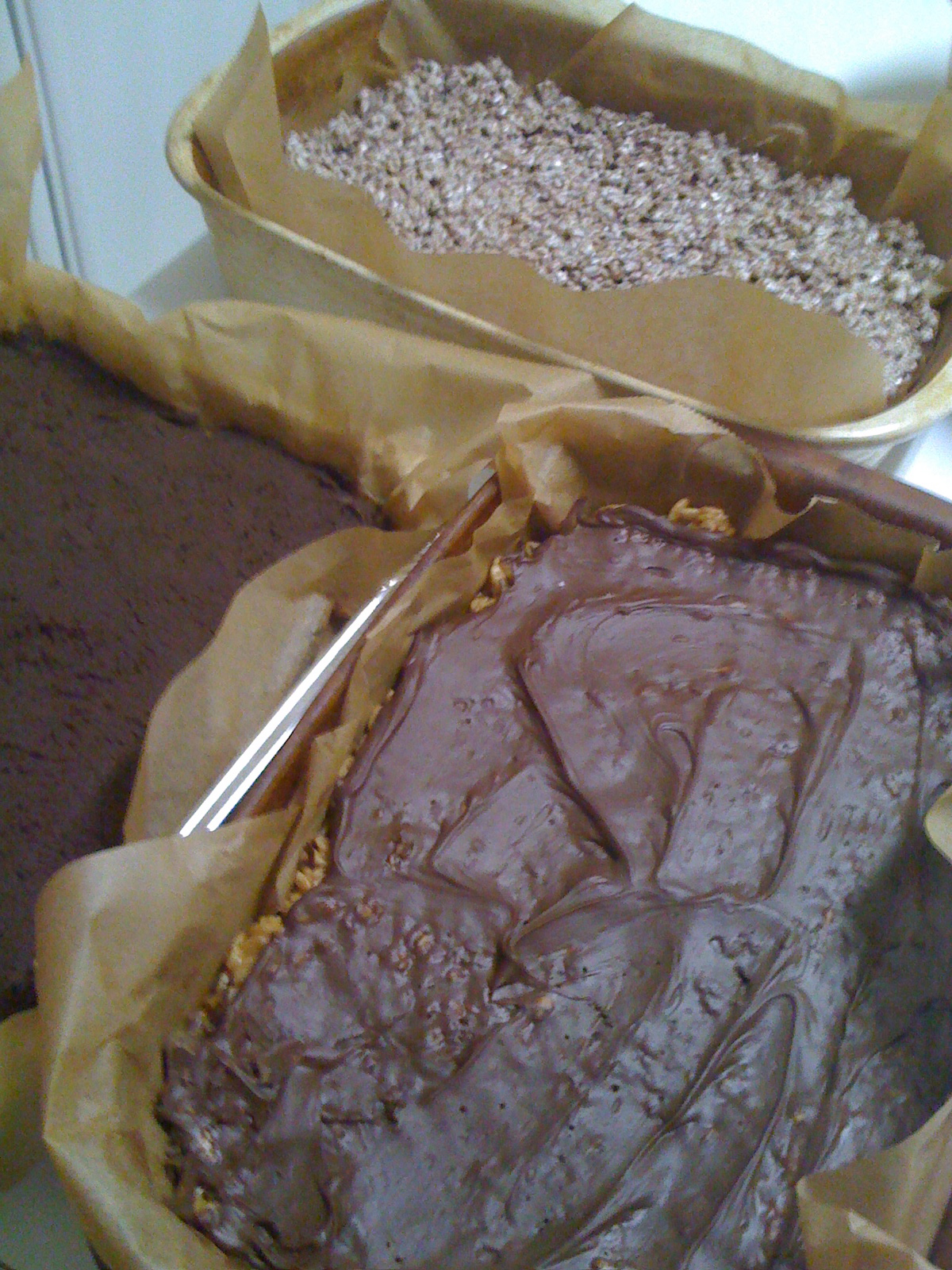 I made my Grandma’s scotcheroos, which for years I thought were rather original, but lately I’ve heard people talk about them more and more. These are an absolute family favorite. My brother and I can eat them in mass, and I usually bring them to the family Christmas celebration so we can munch on them all day long. I found the recipe online here. 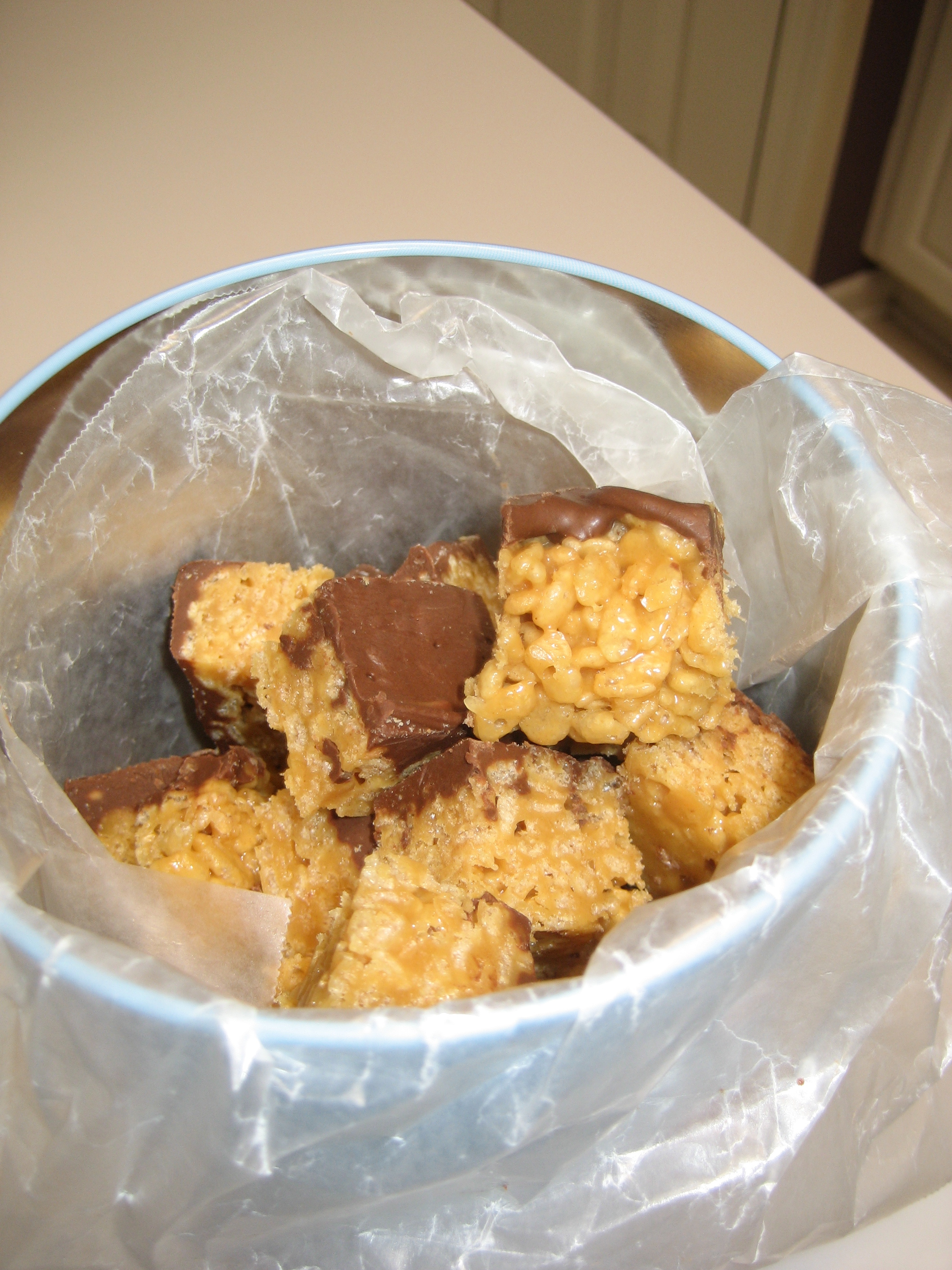 I made some Cocoa Krispies treats at the request of my husband. Someone brought them to a Christmas party we were at on Thursday, and we inhaled them. They are SO good. It’s crazy how good they are – better than the original Rice Krispies treats. Something about that hint of cocoa. And, they’re a light treat, so you can eat more – gotta love my logic. The recipe is on the Cocoa Krispies box and I also found it here. 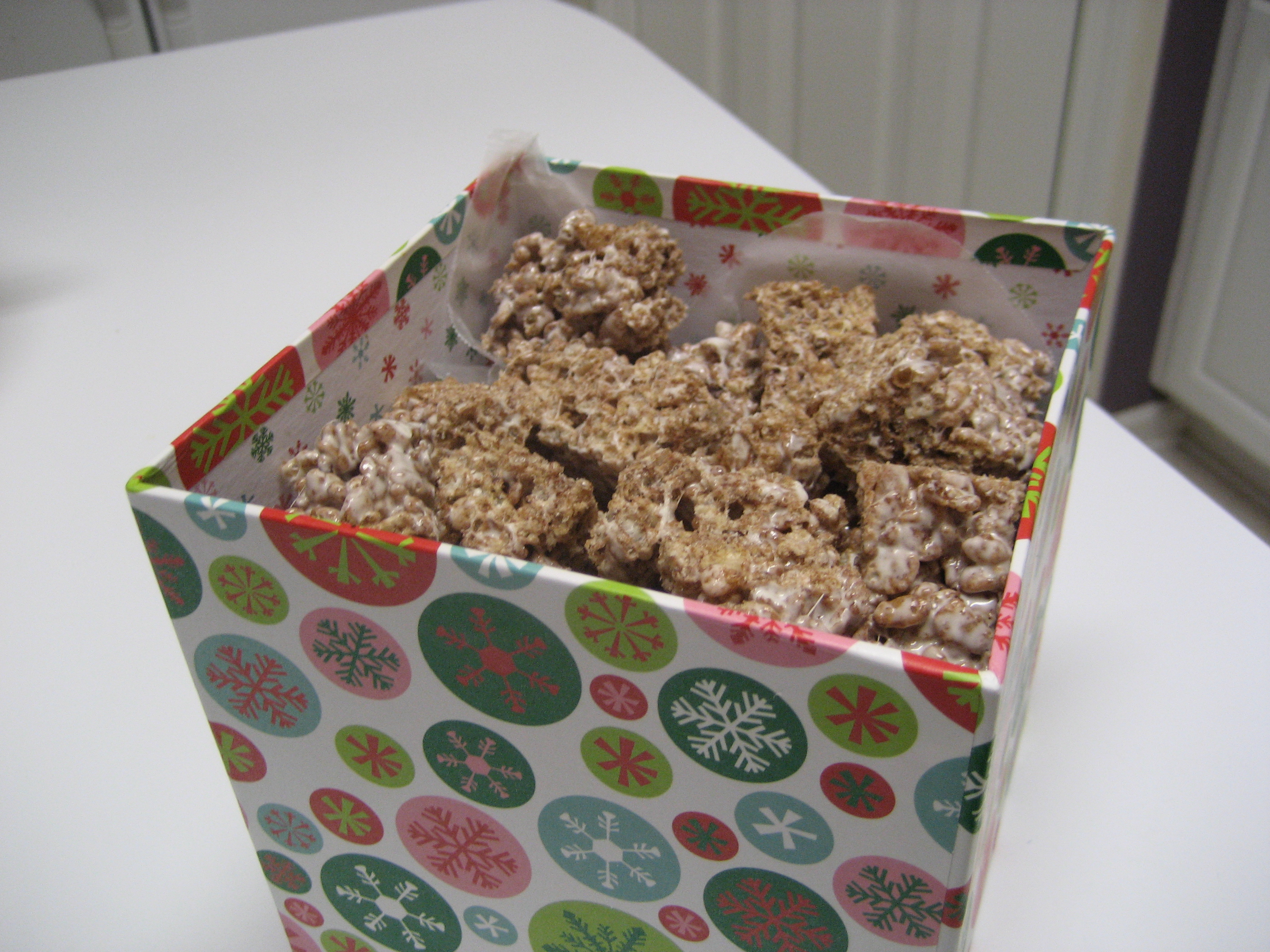 I also made another batch of my Peanut Butter Chocolate Fudge that I talked about here. It’s always a favorite, and I know it will go quick tomorrow. 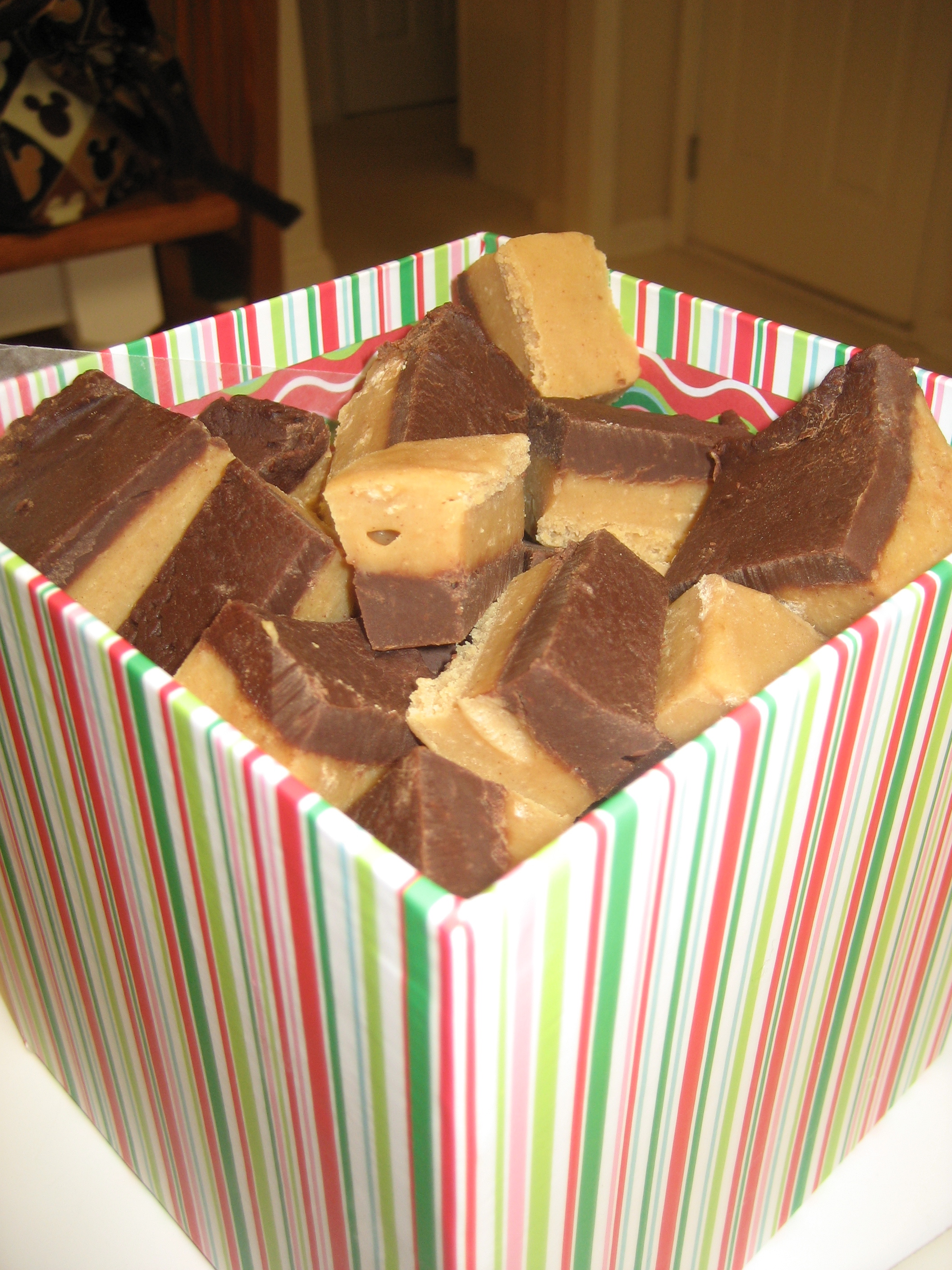 Finally, I made some White Chocolate Candy Mix. I needed to give something small to twenty people. I wanted it to be easy to package and distribute so I landed on that. I got this recipe about fifteen years ago when I was teaching an economics lesson to my second graders. They had to bring in something to sell, and one little boy brought in this candy mix. At the time, I’d never had it before. Now, I’ve had it in many variations. It’s sometimes called White Trash Candy too. Here’s my recipe…

Slowly melt chocolate over low heat. Mix other ingredients in a large bowl. Slowly pour melted chocolate over mix while gently stirring to coat mixture well. Spread the mixture out on waxed paper to cool and harden. Store in an airtight container.

I didn’t have any white chocolate chips. Well, that’s not true. I had some, but I’d had them so long that when I tried to melt them, it was not a good thing. So, into the trash they went. Note to self – you can’t keep white chocolate chips for five years and expect them to still be good. I did have a package of white chocolate coating that I had bought last year, so I melted that in the microwave and used it. Turned out great. In fact, I think I liked it better. Not sure yet though. I also used a 19 oz bag of M&Ms. They were BOGO at Publix, and I feel you can never have enough chocolate – never.

I had enough mix that I was able to do all the little baggies I wanted and send a container with my husband for his store. It always makes more than I think it’s going to. 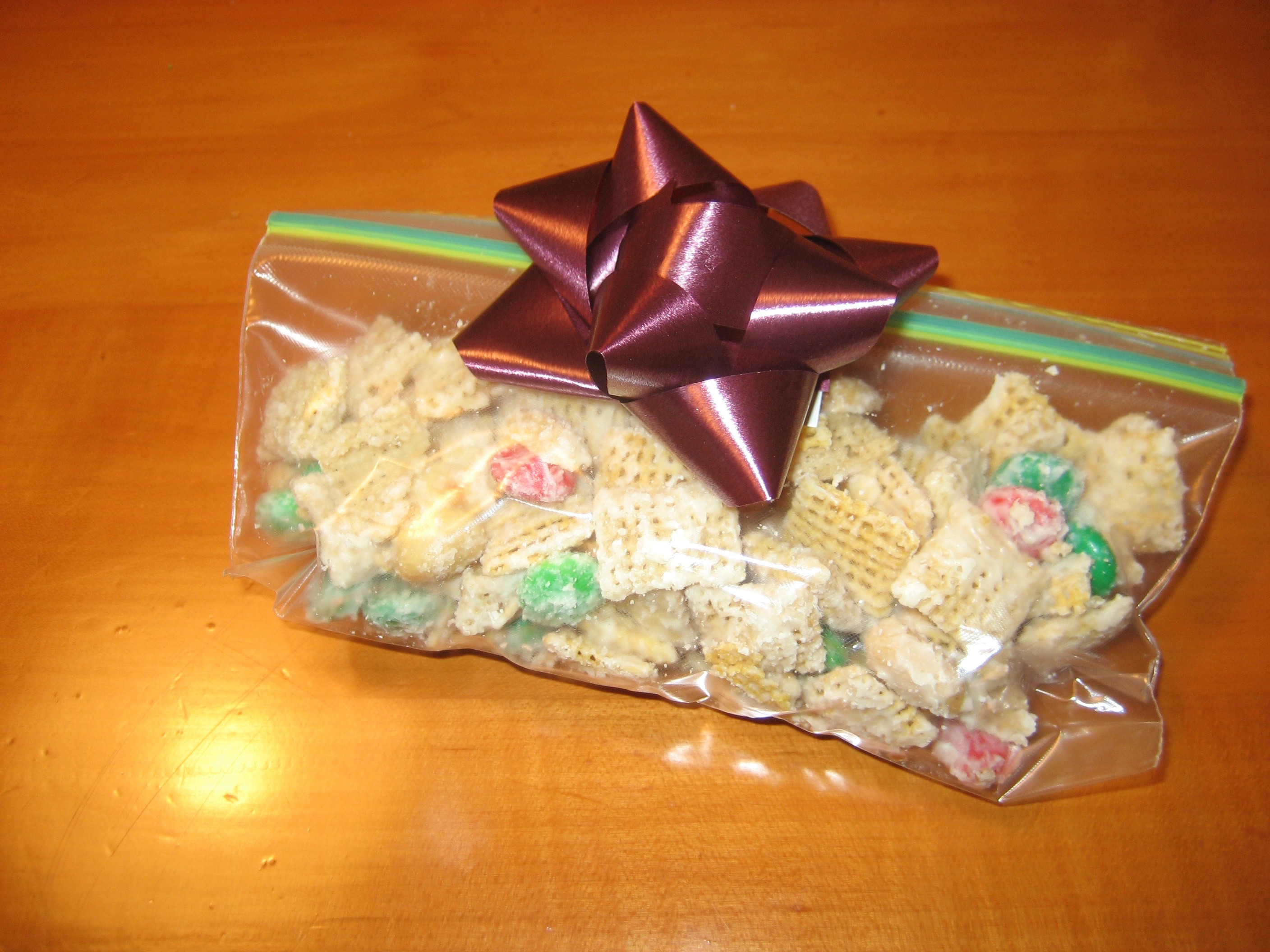 Another round of “baking” done. I have now baked for most of the folks who get treats for gifts. Now, it’s determining which pies I’m taking to the big family gathering and what I’m going to make when my sister-in-law’s family comes over. I’m feeling a little adventurous lately. So who knows what’s going to happen in the House of Hills kitchen next!