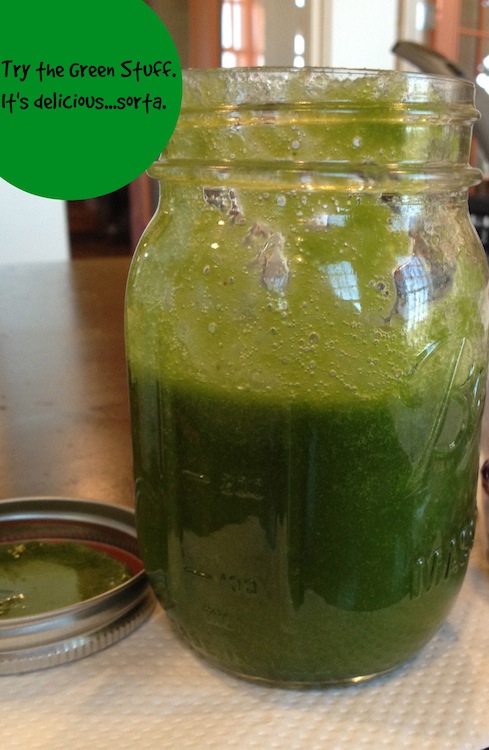 The biggest buzz is because as a rule I don’t eat green stuff, at least not regularly. I certainly don’t eat really good for me stuff. Ever.

However, we got a Vitamix for Christmas. I’m getting old, and not any healthier. So, add those two together, and you’ve got me trying to get more good stuff in my body.

Last week, I decided I needed to whip up a batch of my Sister-in-Law’s (David’s sister) famous green smoothie. I first encountered this smoothie a few years ago at my Father-in-Law’s house. My SIL is so dedicated to this smoothie that she brought her Vitamix with her on vacation. Since she started drinking it (and exercising), she’s gotten in thinner and healthier. She still drinks it every day. My Brother-in-Law started drinking it, and his blood pressure went down. I’m thinking it’s gotta be good for more me.

I whipped up a batch last week after a trip to Costo had me bringing home the biggest bag of spinach I’d ever seen. I quickly realized that one batch is MUCH more than I can drink in one sitting. In fact, it makes four pint jars worth. Good grief! What was I going to do with all that smoothie!

I put one in a glass to drink, one in the fridge and two in the freezer. Then, I took my first sip. It wasn’t bad. In fact, it was kinda refreshing. I sorta liked it. I drank the whole glass and wasn’t gagging. 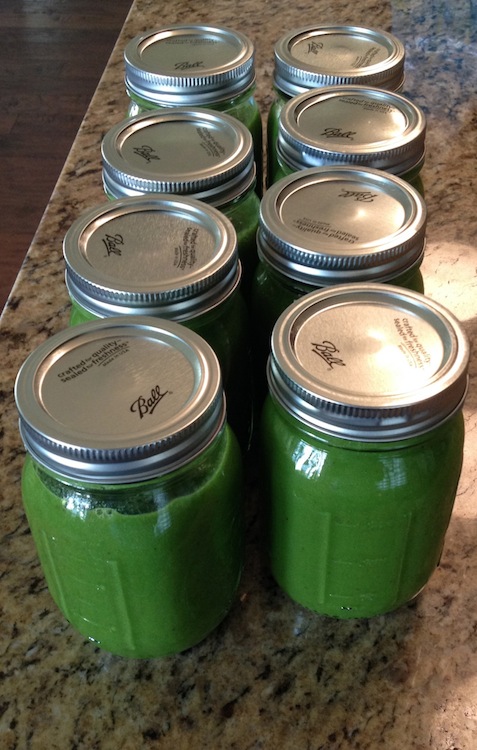 So, today, I whipped up two batches for this week. The majority is in the freezer. One is ready for tomorrow’s lunch. I’m not really sure I know what to do with that. What’s happening to me???!!!

Below is the recipe I’ve been using. There is no real exactness to it. And, I have to give credit to my SIL. And, she’s tweaking a recipe she got from someone. So, thank you to whomever that is. It’s in no way perfect. And, you can tweak it to make it the way you like it. Oh, and remember I’m using a Vitamix, which can chew up whole lemons. You’d have to adjust to your own equipment.

Blend that until smooth.

Blend until smooth. I use the “Smoothie” setting on the Vitamix.

Pour into four mason jars. I use the freezer safe ones.