Holy cow! It’s been a long time since I’ve blogged. I’ve been spending too much time on Facebook and Twitter. However, there comes a time when everything can’t be said in a status update. 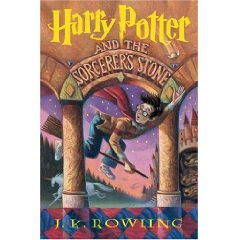 Tonight was a night I have actually looked forward to since Maggie’s birth.  Truly. Seriously.
Those that know me know my absolute love of the “Harry Potter” series of books. I read the entire series every summer and have even read the last book (came out summer 07) at least 4 times already.
I’m such a fan that when book 5 came out the same weekend that Maggie broke her arm at 10 months, I set her in exersaucer after exersaucer while bouncing her and trying to get a couple chapters in.  When books 6 and 7 came out, I took the day off from mommying totally so that I could read them straight through.
I think J.K. Rowling is an AMAZING author. I loved using her work to teach vivid descriptions when I taught 5th grade. You can read/listen to her words and total envision this alternate universe that she created.
So, to say I was looking forward to sharing her works with my child is an understatement. The question was when to share them. The Harry Potter series gets dark and evil. Book by book, the villain, Voldemort, becomes more and more powerful and Harry is put in more and more dangerous situations. So, David and I talked long and hard about when to introduce the books to our precious daughter.
We consulted with lots of friends. I reread them countless times. We finally decided that Christmas break of 1st grade would be okay for the first one. By that time she would very much understand the difference between fact and fiction. She also had to be able to understand good and evil.  She needed to be able to know that there were mean people out there.
Maggie hadn’t really met any mean people in preschool, and up until she started kindergarten she was surrounded by Christians. She didn’t understand until the last year that everyone doesn’t believe in God’s love and grace. She didn’t know that people could be angry and frustrated and not know that they could give those feelings to their Heavenly Father. She totally didn’t get that there are people out there that don’t try to do the right thing all the time like we are teaching her to do. We were pretty confident that by the middle of 1st grade she would have a better grasp of these things and be ready to read about Harry and his battle with evil.
So, tonight was the night. Mags and I had dinner together because Daddy was working a little late. We got in our pjs, Mags went and got the book, and with great excitement, she opened it and read the chapter titles. It was so awesome to see how excited she was to read it.  She knows how much I love Harry Potter and couldn’t wait to have me share it with her. 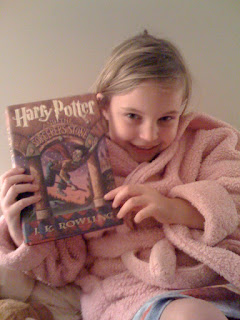 She read the chapter titles and then decided she wanted to read the fourth chapter “Keeper of the Keys.” I had to explain that this wasn’t a book where we could just pick the chapters to read – in “Frog and Toad” all the chapters are really independent little stories. We had to start at the beginning and go all the way through. And it was going to take us awhile.
Then, she started flipping through and realized there weren’t that many pictures – just one at the beginning of each chapter. Her eyes got huge at that one. I explained that this was a book where the pictures would be in her mind. She needed to listen carefully to the words and she would see a picture in her head.
Then I began. And she started wiggling all over the place. Doing twists and turns. Sitting up, sitting down. Rolling around on the bed. And I realized, she is really listening hard. And she’s seriously trying to process all this information.
When Maggie is thinking hard, she’s moving. When she does her homework, she dances. When she’s reading a really hard book, she rolls all over the place. It seems that when her mind is working hard, her body has to work hard too. I kinda think of the movement as the release of steam from the engine. All the energy runoff has to go somewhere.
We read through chapter one and then did a review of characters. She got A LOT, and we just had to review who each person was a little. Then she begged for chapter two, and I indulged. Daddy had gotten home by this time, so he got on the bed with us and listened too. She LOVED chapter two as it got a little more interesting and wasn’t just backstory like chapter one is. She laughed out loud in a couple of places and has decided the Dursleys are “the boring people.” She also said the Hills are not like the Dursleys. We’re “much more fun.”
So, we have started reading Harry Potter with Maggie. To me, this is as much a milestone as her crawling, walking, starting school. She’s grown up just a little bit more. She’s a little bit closer to being a young woman and a little bit farther from being a little girl.