Warning: "continue" targeting switch is equivalent to "break". Did you mean to use "continue 2"? in /nfs/c08/h03/mnt/115228/domains/houseofhills.org/html/wp-content/plugins/jetpack/_inc/lib/class.media-summary.php on line 87
 Losing It! 06 04 10 - House of HillsHouse of Hills 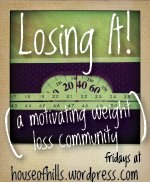 I have a major announcement. Seriously, it’s HUGE!

There has been a 2 in front for at least eight years. Today, there was a 1.

This is a MAJOR MAJOR MAJOR milestone in my Losing It! journey. So major it almost brings tears to my eyes. I couldn’t believe it! There was a 1 in front!

Don’t feel bad if you’re flabbergasted. I even fooled most nurses. I always had to shake my head and tell them to shift it that one more 50 lb weight on the scale. Even when they were looking at my chart of my previous weight, they were surprised. Apparently, I hid it well. I have a doctor’s appointment next week. I’m almost giddy with excitement that we won’t have to shift it that extra 50 lb weight (granted of course that their scale is anywhere close to mine).

This major milestone has given me even more resolve to “just keep swimming” as Dory would say. I AM NOT DONE YET! In fact, I’ve got a long way to go. However, seeing that 1 in front this morning made it worth it. Seriously worth it. Next goal – seeing a 18 in front. That will be an amazing feeling.

***
Are you Losing It? Are you working hard to eat better, get more exercise, and just be healthier? We would love to have you link up with us every Friday. We’re just a group of gals doing our best to Lose It!