Warning: "continue" targeting switch is equivalent to "break". Did you mean to use "continue 2"? in /nfs/c08/h03/mnt/115228/domains/houseofhills.org/html/wp-content/plugins/jetpack/_inc/lib/class.media-summary.php on line 87
 Baked Beans Showdown - The Recap - House of HillsHouse of Hills

Did you hear I had a baked beans party?

When Once A Month Mom and Amy’s Finer Things first threw out there that they wanted to have folks taste-test their baked beans recipes, I thought, “What an awesome idea for a party!” and I went with it. So I announced my party on this here blog and invited friends and neighbors to come and taste some beans! Of course, ever the hostess with the mostess, I had to make it a big ol’ gathering complete with all the trimmings. And a BIG gathering we did have. At my count, there were at some point at least twenty adults and twenty kids running around, in, and out of the House of Hills. It’s was SO MUCH FUN! 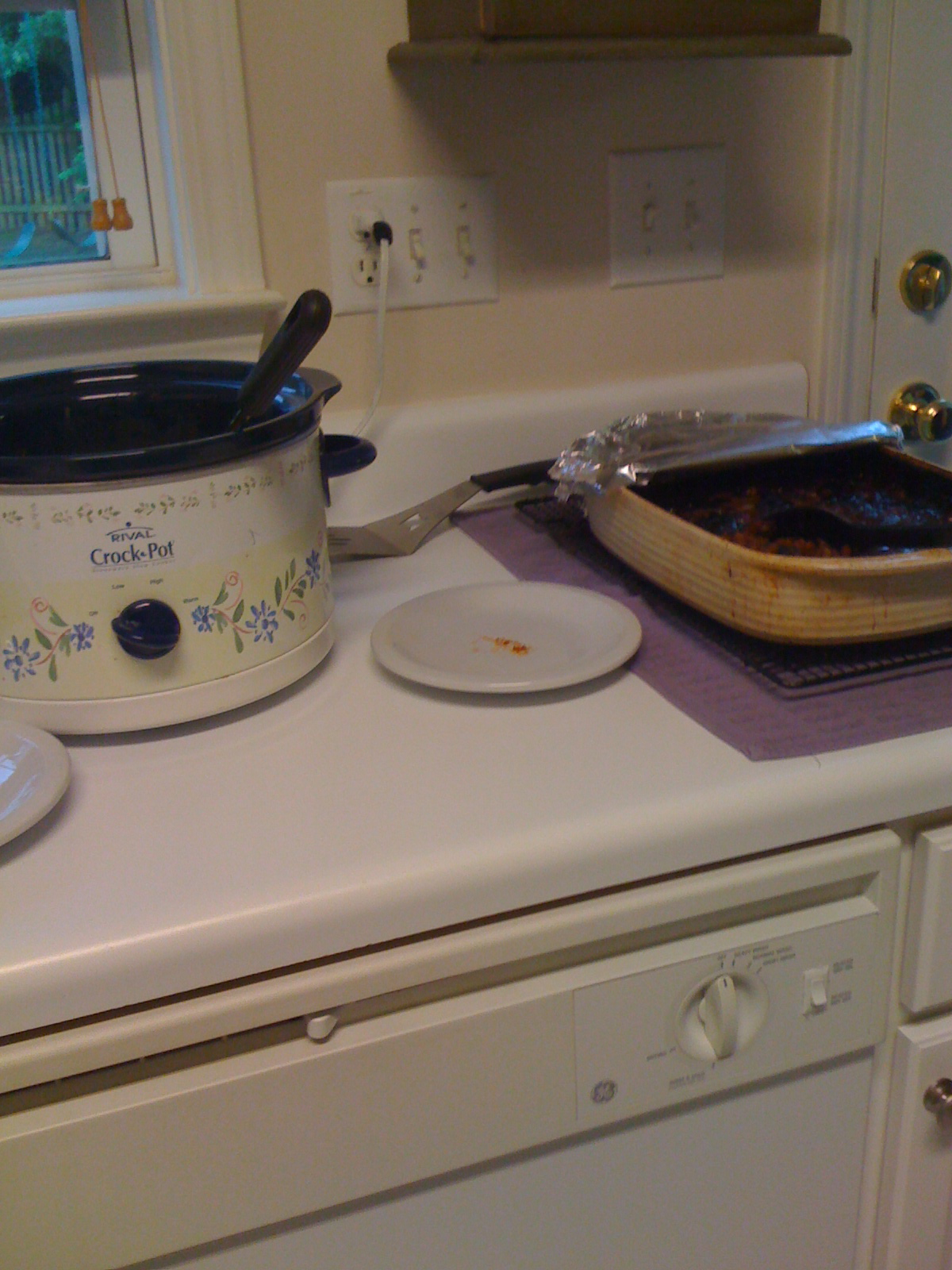 The guests of honor. Amy’s Finer Things on the left. Once a Month Mom on the right.
I will be the first to admit that I overcooked the beans in the pan. I put them in too early. However, that did not keep people from loving them. 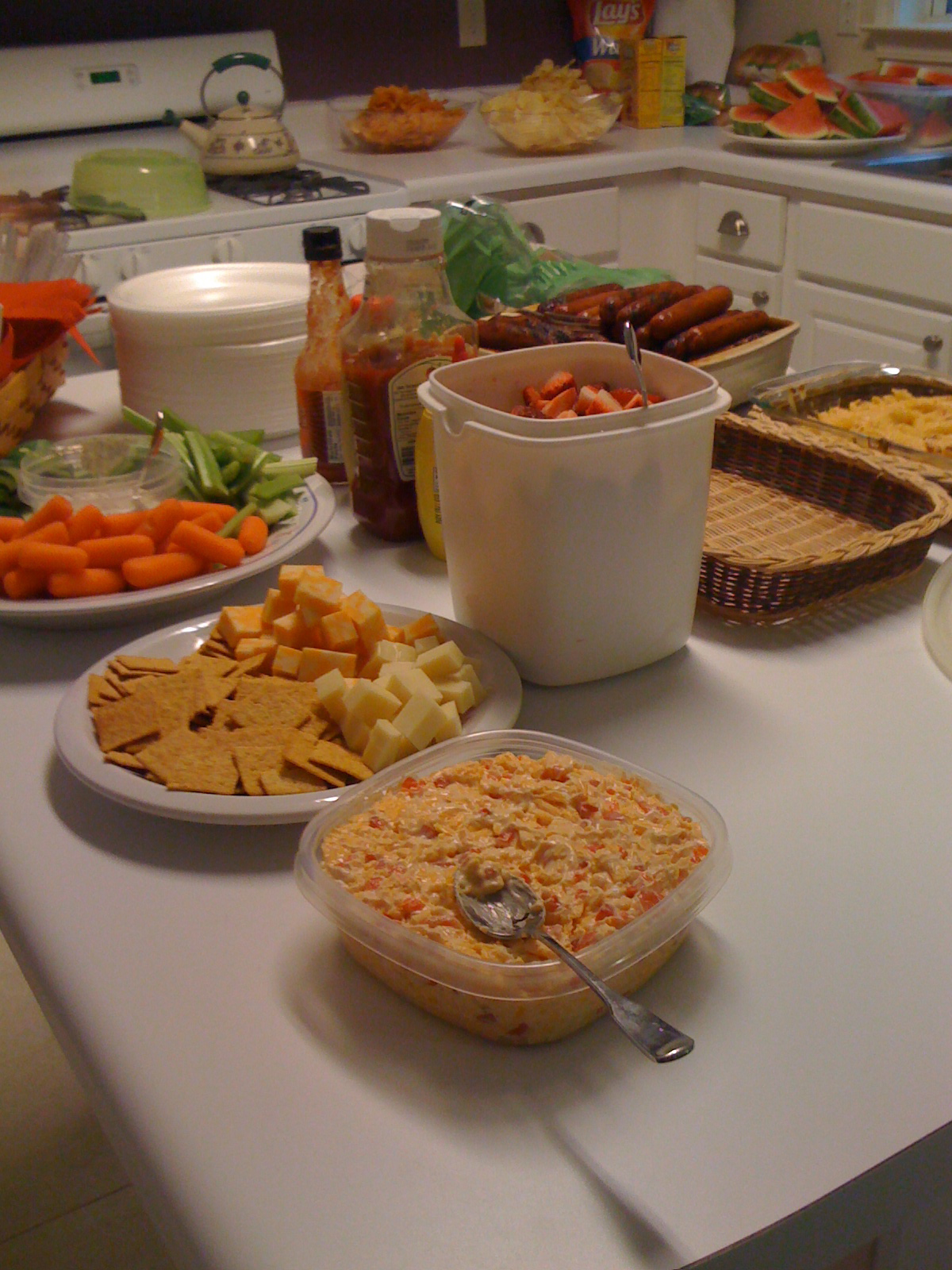 The rest of the spread. Ya, we’ll feed you when you come to the House of Hills. With gusto! HUGE thanks to My Sweetie for grilling forty-eight hotdogs for us. They were very yummy! Hot dogs are so much better grilled don’t you think? And, many thanks to all my friends and neighbors who brought stuff too. I love a good potluck! 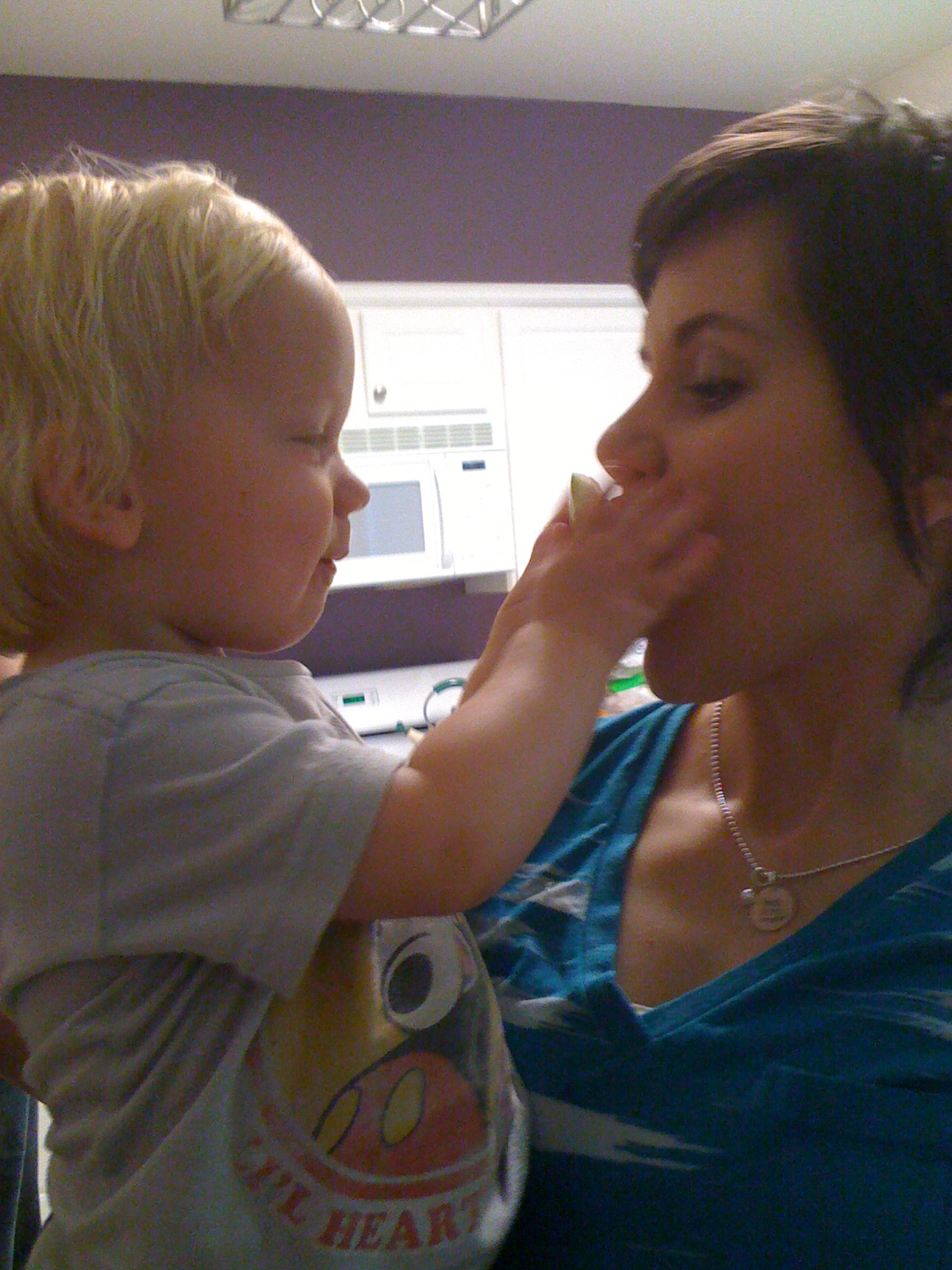 The kids had an awesome time playing outside, and a few even tried the baked beans. OhAmanda’s Asa loved both beans recipes. He couldn’t really articulate which one was the best (since he doesn’t talk yet), but he for sure liked them. All the kids LOVED the watermelon. Doesn’t watermelon just scream summer to you? Here, Asa is sharing some with Mommy. At least, I think that’s what he’s feeding her. 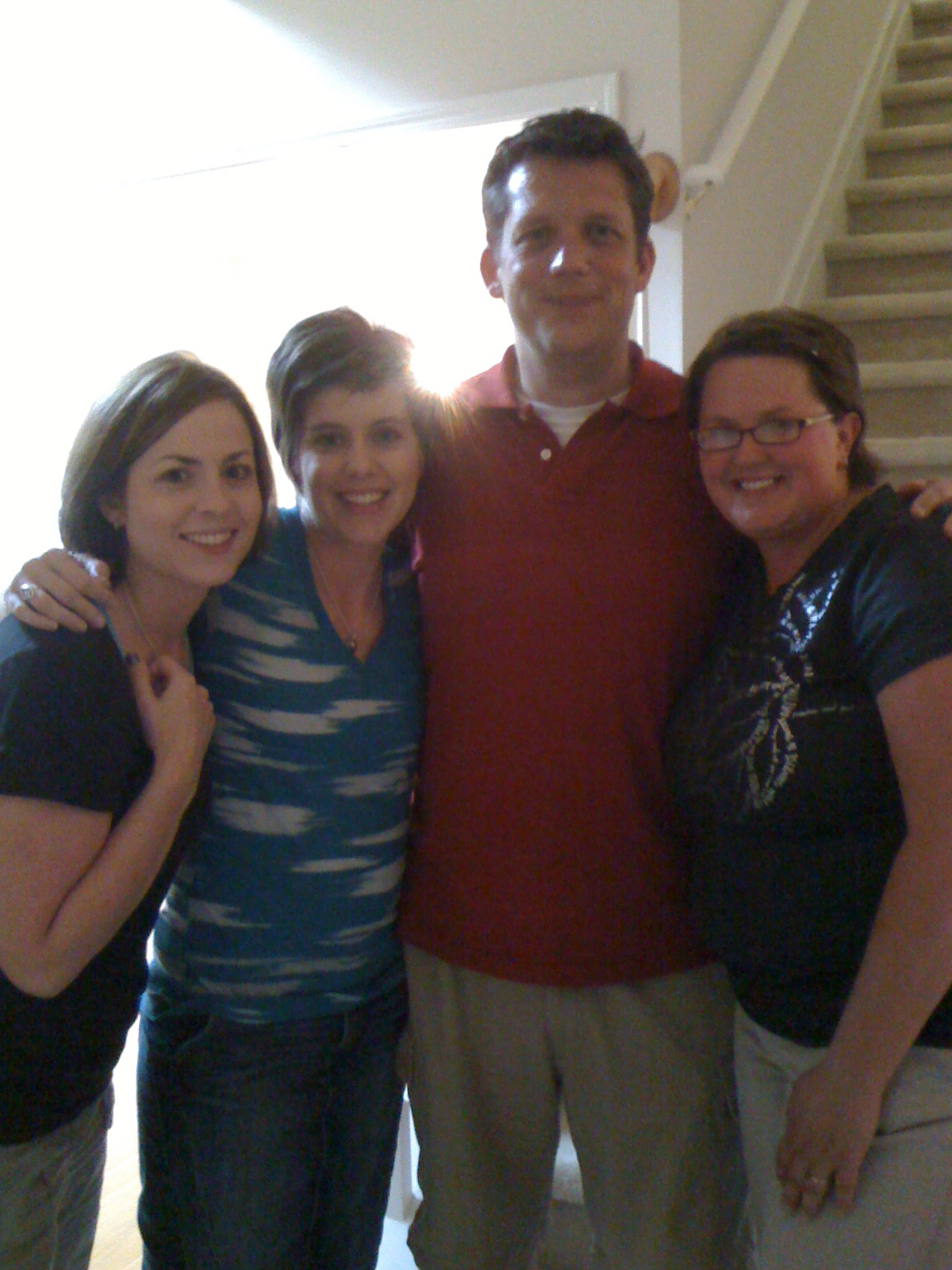 Perhaps one of the coolest things that happened was the mini-reunion that the Sisterchicks had with their old former Youth Pastor, who happens to be my neighbor. Did I know they had this relationship? Yes. Did I remember? No. OhAmanda’s squeal of joy when Lare walked in the house was just awesome. They were all so excited to see each other and catch up. Definitely one of my favorite parts of the evening. 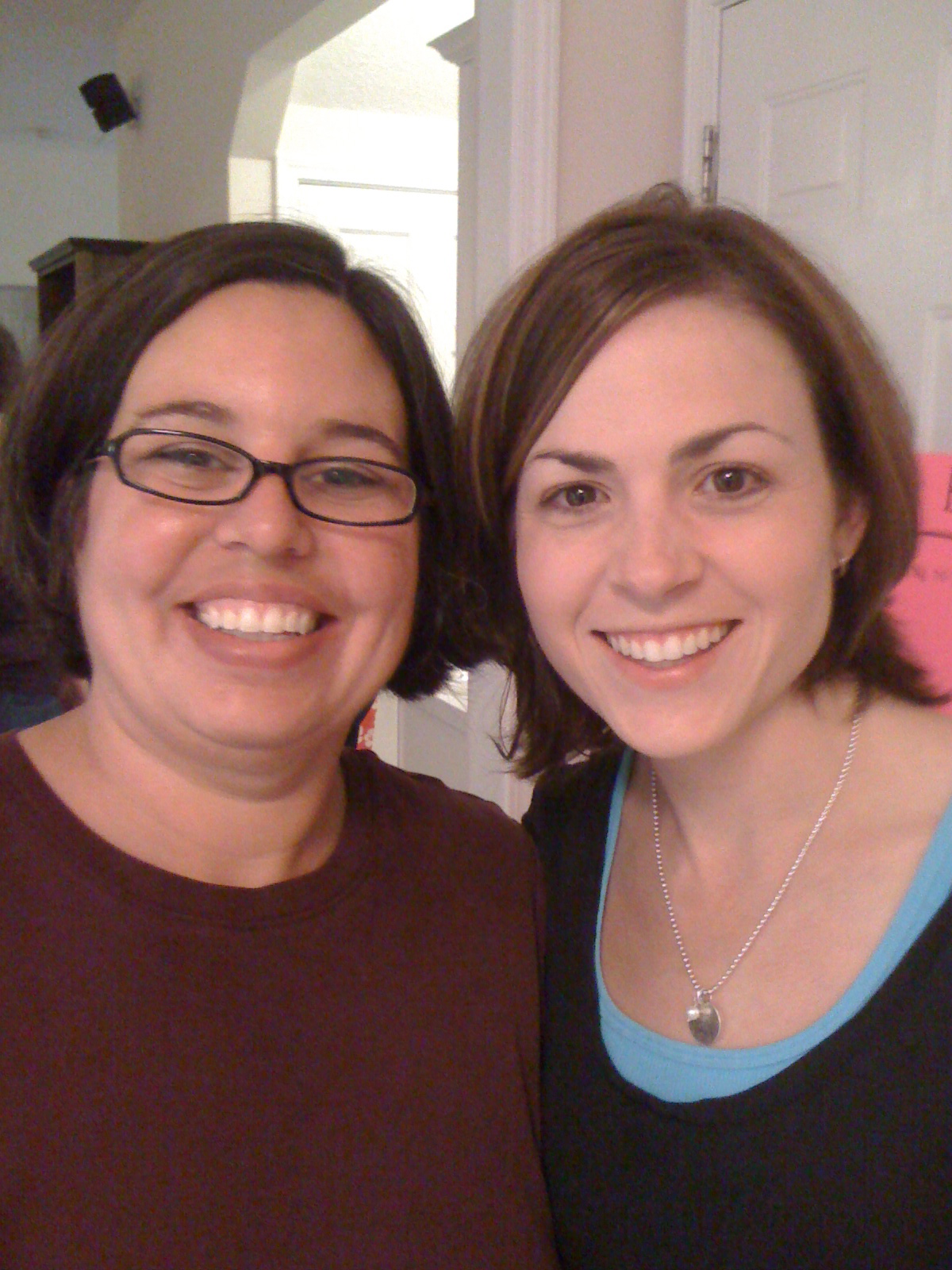 My other favorite part of the evening was getting to meet Mandi (AKA ItsCome2This). We have been Twitter/Bloggy friends for awhile, but had never physically met. So, when she emailed to say she was coming, I was SO EXCITED. I was even more excited when she actually walked in the door. Yay! for new friends.

It was such a FUN FUN FUN evening – everything a summer gathering should be.

Oh, you want to know who won the baked beans contest.
Right! That was the point of this post.

Everyone voted on this cool tally chart I made.
Can you tell I used to teach elementary school? No? Really? 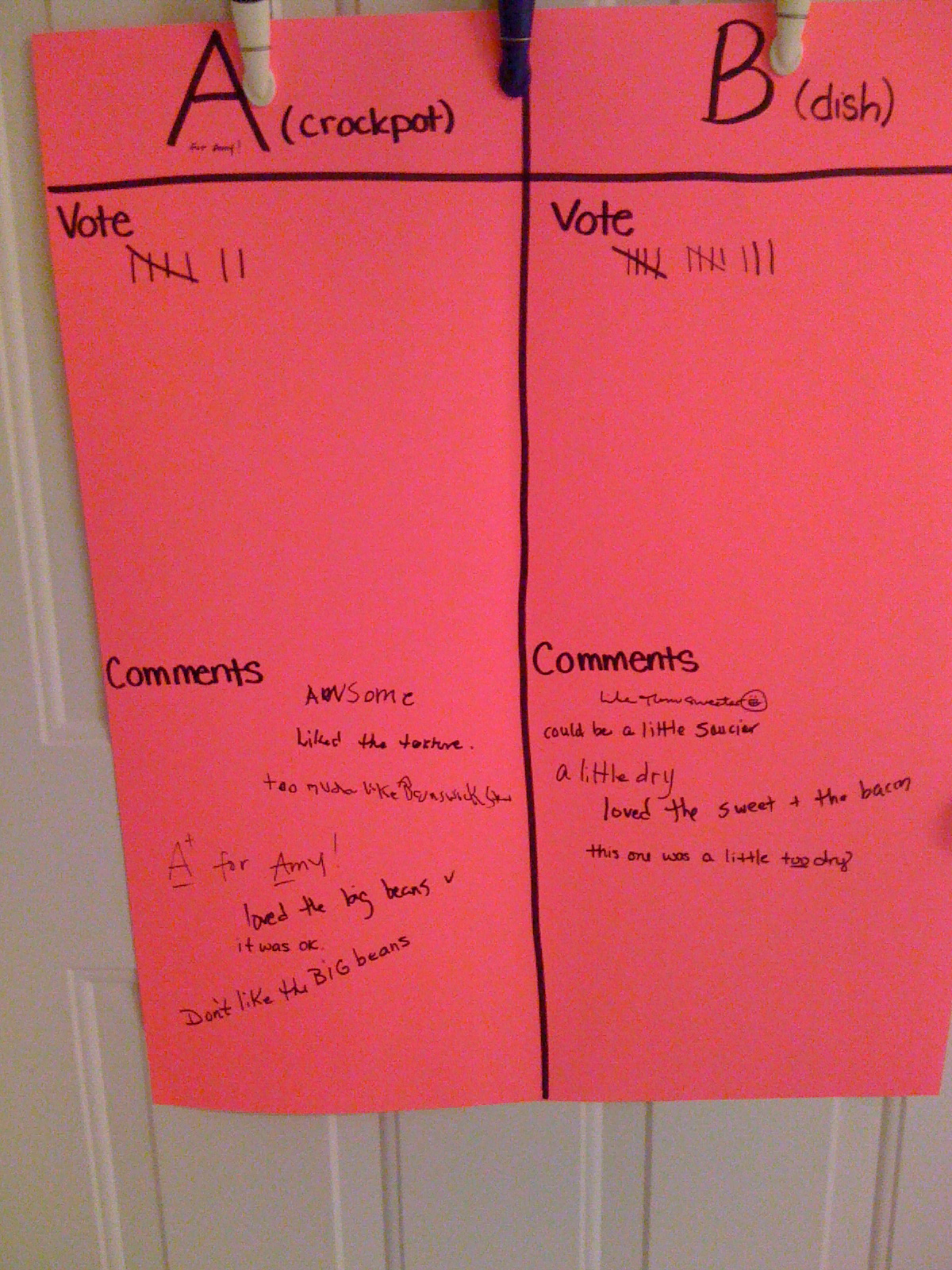 As you can see, Once A Month Mom was the clear winner with thirteen votes while Amy’s Finer Things pulled a mere seven votes. I know you can’t read the comments, but the general consensus was that Amy’s Finer Things’ beans were just too different from the traditional. However, that’s what I loved about Amy’s. Yes, she got my vote. In general, it seemed that those of us that were not true baked beans lovers liked Amy’s over Once a Month Mom’s. Those that were baked beans lovers went with Once a Month Mom’s more traditional recipe. Please note that the majority of her comments were that the beans were a little dry, which would be MY fault.

CONGRATULATIONS TO ONCE A MONTH MOM!
The winner of the House of Hills Baked Bean Showdown.

Thanks Amy and Tricia for an awesome reason to party. You ladies are the best!
Thanks also to Van Camp’s Baked Beans for sponsoring the fun.