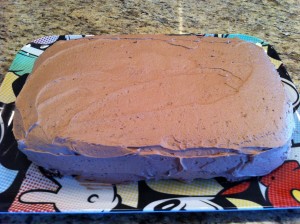 A few months ago a co-worker asked if I’d ever made a Coca-Cola cake. I was intrigued. I hadn’t ever even heard of Coca-Cola cake. He suggested that maybe I might like to try making one. (My co-workers are often suggesting I should try different recipes as they usually get the leftovers.) So, when I stumbled across this Coca-Cola cake recipe, I bookmarked it. I had actually looked at the Coke website for a recipe. Their recipes seemed too complicated for me. I’m a Betty Crocker NOT a Martha Stewart.

A few weeks ago, one of the women in my small group suggested that maybe I should make a cake for her birthday which was coming up soon. (Do you notice a theme here. People always suggesting things. Guess they know I love to cook.) I thought, “Hey! I should make that Coca-Cola Cake I found awhile back.” And, that’s just what I did.

Whisk together the cake mix and pudding. Add eggs, oil and Coca-Cola and mix until combined. Pour into a greased 9×13 pan and cook at 350 for 30 minutes. Let it cool for 10 minutes before flipping it onto a cookie sheet or platter.

You can cut the cake in half and ice as a layered cake. (That’s what I did.) Or, you can just ice the cake. 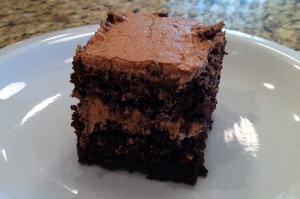 It was REALLY good! So good that people who ate it at the office when I wasn’t there even emailed and called me to tell me how good it was. I’m thinking they want me to make that one again.

If you want to go a little crazy, the author of the original post even lists several other soda and cake mix combinations that might be yummy.

Do you use Coca-Cola (or any other sodas) in one of your recipes?