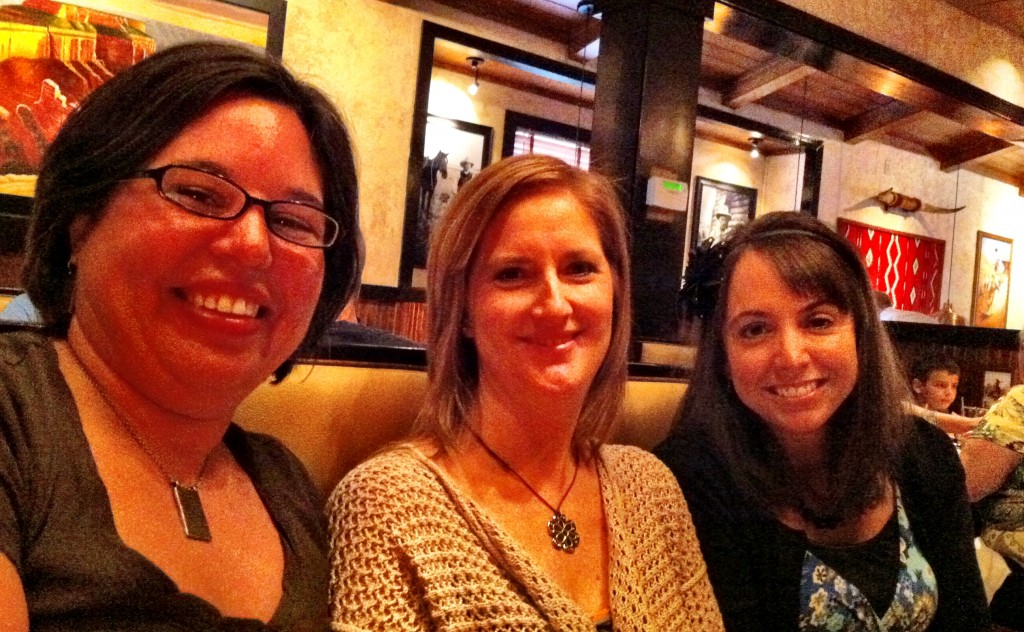 These are “The Sisters” – that’s what my Katie’s hubby, Scott, has dubbed us. We’re not biologically related, and we weren’t even great friends six months ago. But now, we are “The Sisters,” and we are tight.

How can three ladies, who all revolved around one person (my Katie) become close and sister-like in less than six months? Actually, I think it took less than forty-eight hours. It only takes one thing. It takes a tragedy. It takes a monumental event that pulls you out of the orbiting that you’ve been doing and straight into the heat of battle.

Before Katie passed, we all knew each other. We were all Katie’s friends. We were at some of the same gatherings. We’d made small talk and compared kid stats. But we didn’t have a strong relationship with one another.

I was there as the chief BFF. (That’s what I always called myself. Katie called me sister by another mother.) I stood in the room and rushed to the nurse when needed and made sure Scott drank water and Katie’s mom had a coke. That was my role. To be there, bedside.

Angela was chief logistics coordinator. She and her husband had already started talking to the church about the Celebration Service. She was at the ready with funeral home and graveside service information. She was the connection to their current small group and the church. She was a vault of phone numbers. She is AMAZING in “go” mode.

Melanie was chief of childcare. She was and still is the one Katie’s kids turn to first for hugs and kisses. Katie’s kids had spent lots of time with her and her family. They felt safe and loved by them. It was Melanie who drove the kids to the hospice so they could say goodbye to their mother. It was Melanie who took their exhausted selves home to bed that night. She is a “baby angel” as Katie once called her.

The three of us and our husbands spent our Valentine’s Day night saying goodbye to our friend, Katie, and sitting with her husband, Scott. We all had childcare arrangements because it was Valentine’s Day. However, rather than going out, we ate Chick-fil-a and drank sweet tea while we sat in the hospice and talked and laughed and cried. When the hospice nurse asked if someone was coming from the church, Scott looked at the three couples sitting with him and said, “They’re already here.”

Our Katie went to dance with Jesus the next morning….

The next forty-eight hours found the three of us in the thick of caring for the family, disseminating information, organizing services, planning meals, and mourning ourselves. It was a whirlwind, but at the center was the family and us.

The day after Katie passed, I was sitting in an Atlanta Bread Company working on the obituary. (Yes, sometimes it sucks to be “the writer.”) Angela called and wanted to run something by me. She was nearby so decided to come on over. Thirty minutes later, Melanie showed up to help us pick pictures for the Celebration Service. We sat there for three hours. We laughed. We cried. We felt. We hurt. We all knew how the other was feeling. We each understood the others’ pain. We became friends. We became “The Sisters.”

I love these ladies. I’ve become extremely intentional about nurturing my relationship with them and their families. They’ve suffered the same loss I have. They know what I’m feeling. They love Katies’ babies and her hubby as much as I do. They get me. For that, I am truly blessed.

Linked to Things I Love Thursday because they are awesome and I love them.

17 thoughts on “Things I Love Thursday: The Sisters”